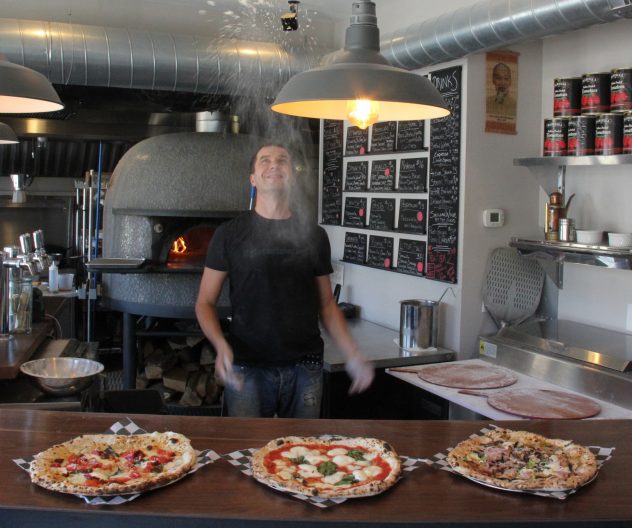 The pizza you are about to enjoy will cook for ninety seconds in the oven, just enough time for the cheese to melt and the dough to unevenly brown and bubble. But Vytauras Sasnaukas has been thinking about this pizza, your pizza, for more than thirty years. His search for this elusive perfection has brought him from Lithuania to Cleveland to Naples, and finally home to Citizen Pie.

Growing up during the Soviet occupation, V remembers a diet of meat and potatoes, bacon, onions, sour cream. He was twelve when he first tried a round dough topped with cheese, hard-boiled egg, and olives. That Lithuanian “pizza” resembled in name only the pizzas he makes now—but for V, it was nevertheless a revelation. He began making pizza for his friends topping them with hot dogs and ketchup, or with herring, pickles, and more of that same sour cream. His friends began requesting their own toppings, and V happily obliged: he loved watching other people enjoy these pizzas he made.

Time passed; times changed. The Cold War ended, Lithuania gained its independence, and V continued dreaming of pizza. He attended culinary school just as the first pizzerias were opening in Lithuania, but he kept his eye on the United States. When the chance came to move to Cleveland in 1996, Vytauras left Lithuania learning English by reading cookbooks and Michael Ruhlman’s Making of a Chef.

Even after he opened his first restaurant, he continued the quest. But when V saw Wolfgang Puck make a pizza in less than two minutes in a wood-fired brick oven, he knew he needed one of his own. The high heat was V’s second great pizza revelation. The next was his first trip to Naples. V had returned to a culinary home he’d never known and it confirmed what he’d been learning all along: the old world traditions of the Neapolitan pizzaiolos led to the balance and taste he’d sought for so long.

Here in Cleveland, Vytauras continues the work. The pizza you are about to enjoy will cook quickly. But the dough began yesterday morning with the kneading of Italian milled 00 flour, salt from Italy, and Cleveland water, along with the starter that he has nurtured for years. Depending on temperature and humidity it leavened slowly as the day stretched into evening. Today, V says, is a good dough day.

Before you arrive, V kindles the oven with apple, oak, and cherry logs—hardwoods just dry enough not to pop like gunpowder and throw sparks across the oven floor. The floor itself is volcanic stone from the foothills of Vesuvius. The stone must transfer heat in just the right way for his dough to fluff—the cheese to melt, not too much, not too little…

Now V walks through the dining room, checks temperature and humidity for tomorrow’s dough, checks the oven temperature to make sure the heat is just right (870°—920°F) for the alchemy that changes dough, tomato, and cheese into something wonderful. There are no knobs, nothing is automated – just constant checking to insure that a harmony of all the elements is present in order to achieve balance, greatness even.

Tonight V will wake again in the small hours, explain to his wife, “I have to make pizza,” and tiptoe down to the kitchen for his first espresso of the day and to begin the work once more, forever thinking about how to improve his pizza. “If you think you have the perfect pizza recipe,” his Neapolitan mentor, Franco Pepe, once said, “you’re not a pizza maker.”

V knows none of it will ever be perfect. That’s what makes him a pizza maker. He’s still astonished at the magic that can come from just a few perfect ingredients and a hot oven. And he still loves to see his friends enjoy the food he makes. That’s what keeps him going. That’s what brings Citizen Pie to you.

WELCOME TO OUR PIZZA REVOLUTION